Review: Hatebreed - "The Divinity Of Purpose" 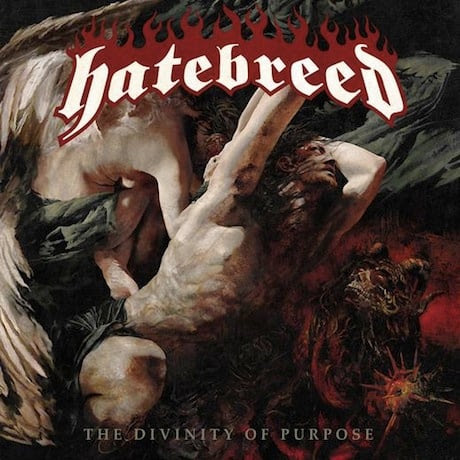 1. Put It To The Torch
2. Honor Never Dies
3. Own Your World
4. The Language
5. Before The Fight Ends You
6. Indivisible
7. Dead Man Breathing
8. The Divinity Of Purpose
9. Nothing Scars Me
10. Bitter Truth
11. Boundless (Time To Murder It)
12. Idolized and Vilified

Hatebreed's frontman Jamey Jasta has been pushing the new album "The Divinity Of Purpose" as the groups best release to date, and even with albums like "The Rise Of Brutality" and "Perseverance" in their back-catalogue, Jasta's claims are definitely not without grounds. From the opening seconds of album-opener and first single "Put It To The Torch" there's the feeling that Hatebreed's street-level vibe and furious sound has been stepped up a notch. There's no change in musical direction to be expected, nor desired. There's gang vocals a-plenty, as found in "Honor Never Dies", brutal breakdowns in pretty much every song, and Jasta's defined shouts pushing themselves through the dense musical barrage.

Hatebreed have always managed to stand apart from the crowd of 2-bit hardcore bands by utilizing a meatier sound, better production values, and most particularly their lyrical content. Where most hardcore music is comprised of songs about fighting, politics and social issues, usually with a very negative approach; Hatebreed's lyrics are those of self-empowerment and personal strength. A prime example is in the song "Own Your World", where some of the lyrics read; "Fist up, head high, we own the fucking world tonight". To this listeners ears, those are just the kind of lyrics that are needed in more metal music.

This album also has a great deal of live appeal. I can only hope that the band tour the UK soon in the year, because there is not a song on the whole album that wouldn't be amazing to hear live. Every track is brutal mosh pit material, and the choruses are just waiting to be screamed along with by a festival crowd.

At the end of the day, this album is Hatebreed doing what they do best, with no frills added, no bullshit. They aren't going progressive on us, they aren't taking a new twist on their sound; they're executing great hardcore songs in the same style they have done for the past nineteen years, and the songs are some of the best they've released in that time too. The bar has been set high for the year to come!