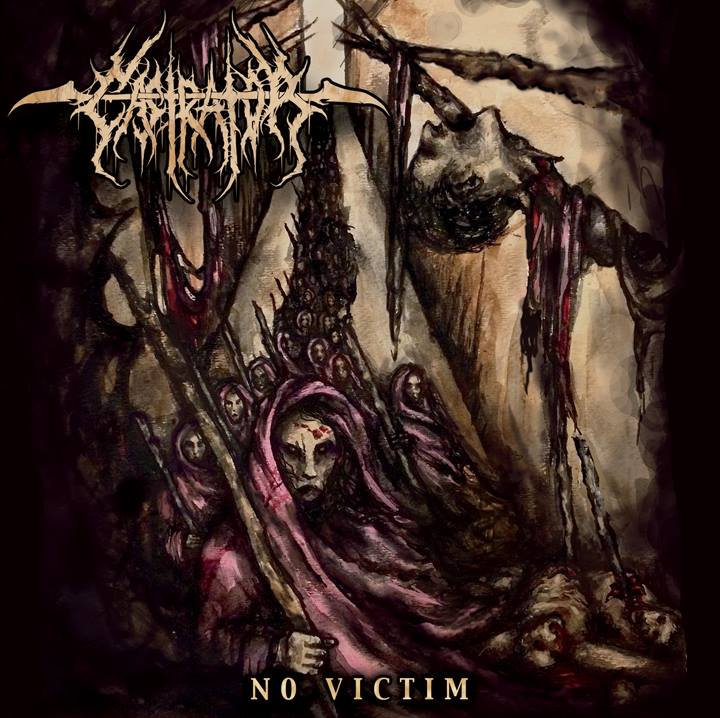 
We all know how death metal generally goes with its themes and lyrics; gore, splatter, death, torture and a lot of vicious and unsavoury things happening to women and children. Well, meet New York's own Castrator! This death metal band comprised of lead guitarist Priscila Serrano, rhythm guitarist Mikaela Åkesson, vocalist Mallika Sundaramurthy, bassist Robin Mazen and drummer Carolina Perez has arrived with a four track EP and have turned the table on all those of a testicular persuasion with a very feminist approach.

It turns out this may be just what the death metal scene needs to spice it up a bit. The usual tongue-in-cheek patriarchal lyrical standpoints of extreme metal have long lost their edge, their shock value and their point due to tirades of similar bands with similar songs. This EP is opened with 'Honor Killing',  presents the following as its opening lyrical salvo:

"Silently she suffers, voiceless and unseen
Imprisoned in a home
She bears children, cooks and cleans
Wed at the tender age of seventeen
His object to rape and beat"

Needless to say, powerful stuff that stings so sharply because of the truth behind the horrifying image. 'Brood' then carries on by talking about women who cannot stop giving birth over and over, showing that the band is not out only to make demons of men, instead making valid points of world issues. The gross precision of the explanation of the process of childbirth is certainly something that may make many blokes curl their toes. Use of phrases like 'Obstetrical haemorrhaging', 'Tearing of the perineum' and 'Placental expulsion' may prove yet that even the most hardened beardy death metal fan may have a point where he says "Fuck sake...ugh!". In the best way possible of course.

It's no small help that the music behind these severe statements of intent is nothing short of crushing. The two guitarists know how to riff, from blistering aural obliteration right over to the side of grooving sledgehammer blows and do it in a way that makes the head bang. Carolina is as skilled as death metal drummers come. Blastbeats seem second nature here, the speed and precision of which are enough to make this EP stand out by themselves. Mallika is a superbly brutal vocalist who smashes apart all misconceptions that women can't perform this style of vocal. In fact, if those idiots who are so sexist about metal are to be believed, then Mallika has a lot more balls than a lot of male death metal vocalists. I've heard a lot of men who are not as good as Mallika (and are, in fact, quite mediocre). Robin's bass playing backs up the rest of the music brilliantly, with a fantastically audible tone which many bassists these days have sacrificed in favour of a smoother, less threatening sound.

Those lyrics are taken from 'The Emasculator' and there is good reason why this song is the highlight of the record. The song tells of female vigilantes taking vengeance against rapists, I think we can all be behind that! It highlights the failure of the legal system to support female victims, and it is easily more sickening and brutal than a whole lot of death metal lyrics.

More-so than all that, in a manner not dissimilar to the eco-warrior lyrics of Cattle Decapitation and Gojira, these are lyrics born of a genuine passion for a genuine cause through which Castrator wish to raise awareness and fight for something that is easily relatable. They do not wish to pussy-foot around these issues, they are shoving them down your throat to a point that is as uncomfortable as it should be. There's no political posturing going on here, this is as real as it gets, and with that comes true brutality, true heaviness.
Give this a listen. Do it. Now. You will miss out if you do not. When you do, let your mates listen to it as well. Just wait, this is one band with the potential to change the game in the extreme metal underground.