Chrome Division, for those of you not familiar with the band, is the booze-loving, strip-club-soundtrack, biker Metal side project of Dimmu Borgir frontman Shagrath. This year marks the advent of their fourth record of Motorhead meets Black Label Society stylings. This isn't a band I've got too much experience of (I've always stuck to Dimmu, to be honest) but I felt like diving into this release, and giving it a write-up. So, on that unprofessional note, let's don the leather jackets and get into it.

After the typical but unexpectedly serene intro of 'Good Morning Riot', 'Endless Nights' kicks in with a talkbox riff and a big stomp that immediately brings almost every great, classic rock band to mind. This is clearly a package that pays homage to, plays with, and puts a modern spin on the most tried-and-true Metal styles. It's unmistakably catchy right from the off, and would work as a good soundtrack to any bourbon-fuelled party. However, it's too derivative for me to take seriously to any degree.

'(She's) Hot Tonight' moves things on equally predictably. First thing entering my mind is that if Airbourne can be called an AC/DC clone, then Chrome Division is the illegitimate child of Motley Crue and Motorhead. If you want to bang your head for the hell of it, drive as fast as you can without getting killed, play air guitar, or practice guitar jumps off your bed, this is the kind of song you'd do it to. 'The Absinthe Voyage' starts with a cheesy sort of grandeur in it's build-up, then it's business as usual; gruff singing, meat-and-potatoes riffing, steady drums, and some flashy guitar solos here and there. It's worth noting that the musicianship on show here is actually very good, especially the guitar leads from Kjell Karlsen.

The sound is crisp and tight, as it should be, and the feel-good vibes ooze from the speakers constantly, though 'Lady of Perpetual Sorrow' is more like a ballad, and a good one at that. It's hard to think of things to say about Chrome Division, to be honest, because it is exactly what you expect! When I say they have a ballad, you can be assured it's more beer-soaked than it is a puddle of tears. This is an album that recalls Rock 'N' Roll at it's most brash and proud; the grit, the arrogant swagger, the drink-and-smoke aura, and the fuck-you attitude - it's all present. 'The Moonshine Years' shows all of these traits, and does so with style.

'No Bet For Free' could've easily been a Motorhead song. The riff at the start reeks of the Motorhead classic 'Bomber'. Pal "Shady Blue" Mathiesen's vocals carry this album to a great deal. The style he puts into every line does conjure up images of somebody trying to imitate the greats, but there's something that Mathiesen does that just sells it really well, and in the best way. I'll be damned if I know exactly what it is, but he does it well. 'On The Run Again' starts out like Load and Reload era Metallica. Shagrath's role on rhythm guitar is not to be understated - he keeps the record tied together well, celebrating the greatness of the simplest riffs. Another A-grade guitar solo comes at you in this song.

'Mistress In Madness' was almost 'Overkill' for a good few seconds at the start, due to Tony Kirkemo doing an impression of Phil Taylor on the drums. 'Reaper On The Hunt' has more of the sing-along quality, 'You're Dead Now' is yet another party starter (Not that the party on this album ever ends!). This is all that can really be said about 'Infernal Rock Eternal' - it's a good, fun album that would be brilliant in the car on a summer's day.

The whole album goes to show that there's nothing wrong with the simple thrills that we all got when we first heard AC/DC or Motorhead. We don't always need high concept progressive wizardry, or blasphemous blackened brutality. Simple, balls-out rock music will always have a place in our world, unless you're brain-dead. At least there's a genuine love for our beloved genre's history on show here, and it's not a Steel Panther style parody or cringe-worthy like Chris Jericho's Fozzy. When it comes down to it, this will never be an album of the year, nowhere near; but it is what it is, and the guys in Chrome Division should be proud of that. 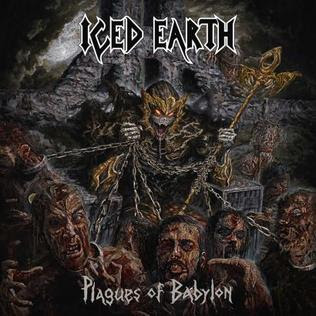 Power Metal is typically a European phenomenon. America doesn't seem to have latched on to the genre the same way that Europe and the UK have. Nonetheless; Iced Earth have had a solid career and here they are with their eleventh album. Dystopia, their last effort from the year 2011, was good enough to my ears but didn't prove to have a lot of staying power to my taste. I was still interested to see how this new record would fare.

The first song, the title track on the album takes you to a dark vision of a zombie apocalypse. It's got the epic feel to go with such a concept. The riffs and vocals accompany each other well and ultimately what you get is a great opening song that gives you a degree of hope for this album. The tricky part comes when 'Democide' comes in, and sounds a little too similar too often. It revives itself when the verse riff injects a Thrash feel. Unfortunately though, it already strikes me that Stu Block's vocal range doesn't seem to go anywhere, and the rhythm of his delivery doesn't vary much either.

There's a nice little show of drumming at the start of 'The Culling' but the song itself is another steady, plodding song which is only saved by a sing-along chorus. In this style of Metal though, such choruses are expected, let alone commonplace, so it's not really a massive shout. There is an impressive guitar solo, but in the context of the song, it's kind of a flash in the pan.

'Among The Living Dead' takes things up a notch, going again into Thrash Metal territory, but it seems like they can't pick up the pace and maintain it; it's not too long before there's a stop-gap where everything slows down. The vocals are a good deal better, and of course the high falsettos are ever present and impressive at the back. I kind of wish they'd bring those big high vocals to the front on occasion, to give the overall sound a third dimension. Lyrically the album has a lot of quality; at least if you want to listen to a narrative about a zombie apocalypse, so Jon Schaffer's concept half of the album has that going for it. 'Resistance' really offers nothing new to the musical aspect of the record, though there is a rather blatant political/social metaphor in the lyrics.

On your first play through of this album you could be forgiven for thinking it all sounds like one song. 'The End?' starts off as a ballad, almost like a breath of fresh air, and then it gets taken back into the exact same territory that the whole album has stagnated in so far! A little frustrating. 'If I Could See You' is a full blown power ballad...and so far is the best song on the album. The clean vocal delivery here works really, really well with the band's sound, better than the half-barked vocals that had been on show up til then. This song feels heartfelt and sincere too, which is a first for the album (though, let's be fair; the songs before were about zombies! How heartfelt can that really be?)

'Chthulu' keeps the bar up at it's new height. At the start of the song it almost sounds like something Angel Witch could've put out. The clean vocals do make their appearance, but the blend of the clean and the harder vocal styles works really well here (why they didn't do this so far baffles me). There's real energy and power, which is handy for a Power Metal band. Lyrically, it's nothing new here, we've all heard songs called after or speaking about the mythical beast.

'Peacemaker' is my favourite song here; of all things it's a western ballad, and a really good one that has a feel of the sand-and-spit grittiness of classic tales of the west. The gallop, naturally is on show here. There's good vocal harmonies and guitar lines to die for. This song has more hooks in it than the album 'Dystopia' had throughout! Try not to sing along, if you dare! 'Parasite' seems to be a slight dip, but I'm happy to admit that's probably because the song prior to it was so great. It's not a bad song, it's just missing the magic that the band finally found in the second half of this album.

'Spirit Of The Times' is something of a typical Power Metal ballad, about being the hero, the incorruptible, the all-round stand-up guy. But that cheese that threatens to weigh it down is trimmed by two things; firstly, the music around it, which is minimalistic, but very effective, proving the "less is more" mantra can work. Secondly...Power Metal die-hards love the cheesiness! (If they didn't, Avantasia would never have seen the light of day!)

I wish I could score this album as two separate albums, because I won't lie; the first half of the album sucked in various ways, but after that it seemed to be home run after home run. So, as much of a cop out as it is, I'll save the all-encompassing summary and simply say; give it a try and see for yourself.