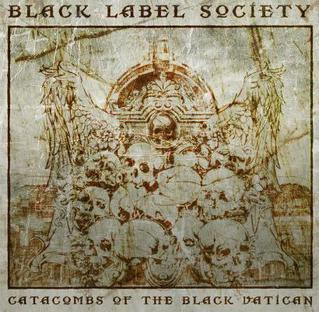 
'Catacombs Of The Black Vatican' stands as the first proper studio album from Black Label Society since 2010's 'Order Of The Black', which was something of a mixed bag to my ear. The rockers rocked loud and hard enough to please the ear of any Hard Rock or Metal fan, but the album suffered from being bogged down by too many ballads. It's great to hear that from the off, this album has some memorable riffs worthy of main man Zakk Wylde's extensive back catalogue.

'Fields Of Unforgiveness' has an obviously Black Sabbath-inspired sound to it, which is to be expected from the man who used to be Ozzy Osbourne's right-hand man. The first single 'My Dying Time' has a distinct feel similar to Black Label Society's 2006 album 'Shot To Hell', in a good way. It's catchy and heavy enough to hit the mark. Unfortunately, the lyrics show Zakk's standing as a born-again Christian, and may be a bit too preachy for some to accept. This is well balanced by 'Believe', which centres on the spiritual again with more of a questioning tone to it, so there is something for everyone to enjoy. The riff is infectious, and the guitar solo is Zakk at his trademark best.

'Angel Of Mercy' is the first ballad to be heard on 'Catacombs...' and it's not that bad, really. Zakk shows again that he can sing both powerfully and gently yet again, while the use of a string section and a satisfying bluesy guitar solo elevate the song. Things then carry on into the groovy 'Heart Of Darkness', which again shows how catchy BLS can be and is one of the more standout songs on the album.

One issue I have is that while the sheen that this album gets from it's production and mixing gives it clarity, it's also sanded down the rough edges that could have given it a bit more impact. As such, even though 'Beyond The Down' may have the best riff on the album, it washes over the listener rather than demanding attention. Still a great song that will probably stand well in their live set, but in the context of the album, this and the other songs could've done with an extra push from the production values.

'Scars' is another ballad that shows the southern tinge of Black Label Society's music well, but other than being a good song to drink bourbon to, this is a lower point on the album, and is probably best left to one side. 'Damn The Flood' is probably the closest to out-and-out Metal that the album gets; it picks up the pace and has a lot more punch to it than the songs that have preceded it. There's another solo in there that gives the long standing Zakk fanatics what they're looking for.

'I've Gone Away' is rather jarring; on the one side you have a heavy riff that's great to hear, but on the other, the vocal melody is rather too passive and dragged out to go along with it. It's more of a grower than a shower, as one can get used to this musical juxtaposition, but it may be rejected by those looking for a quick fix of biker rock.

'Empty Promises' starts with one of the most interesting percussive patterns I've yet heard in a Black Label Society song, showing that the band's latest drummer Chad Szeliga (previously of Breaking Benjamin) can bring something new to the fold. After that it's business as usual for Zakk and Co. The album's closer 'Shades Of Grey' is another ballad, but one of the best that Black Label Society have put out to date. In a word, it's a gorgeous song that should get people holding lighters to the sky. To my mind, it stands as the band's own equivalent to the Guns 'N' Roses classic 'November Rain'. It also makes for a rather classy and unexpected ending to the album.

This is Black Label Society I'm talking about, so I doubt anybody familiar with the band was expecting a big leap forward in terms of their sound, but 'Catacombs Of The Black Vatican' stands as a collection of pretty good songs, that make for an enjoyable listen. By no means would I call it essential listening unless, like me, you fly the Black Label colours proudly. Even then, it's clearly not their best work. Put short; it's a light hearted, fun album that, while good to listen to, unfortunately falls far short of being something truly special.