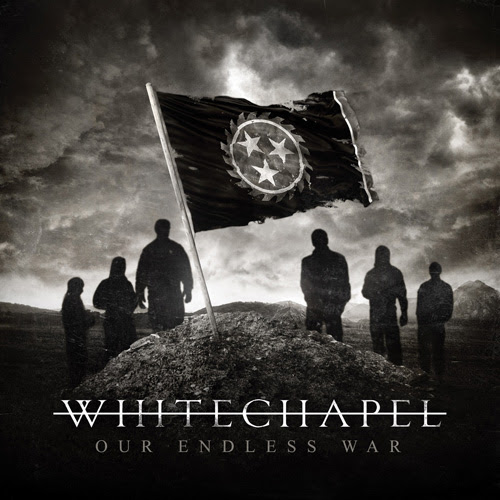 Whitechapel proved themselves to be more than just another American Deathcore band with their 2012 self-titled release. The album combined their trademark heaviness (and it is heavy!) with a moments of eerie tension and showed that they knew just how to craft great songs and build an album that flows with ease despite the brutality of the music. Phil Bozeman's vocals were also at an all-time high. I had admired their previous albums 'This Is Exile' and 'A New Era Of Corruption', but it was the self-titled album that really grabbed my attention. The question now is; How will 'Our Endless War' compare?

In the form of 'Rise' the album begins with a standard-issue tension building intro track. Marching drums, strings and clean guitars set a relatively tense tone before the title track sees the main event begin. A fast track with a truck-load of vocal hooks and an infectious lead guitar line heard in the chorus. The breakdown featured in this is coated with Phil Bozeman's great vocal talents, but the riff and feel of it is rather too familiar to the breakdowns that Whitechapel have used before. Fortunately, more lead passages make up for this to a point. 'The Saw Is The Law' comes in with fairly standard Deathcore fare. The song shifts between slower and faster speeds, giving a lot of dynamics that are heightened by exceedingly fast moments of vocal delivery that are impressive and slightly reminiscent of Corey Taylor's rapid-fire lyricisms of the first Slipknot album. Great track, matching up to anything on the previous album with ease.

'Mono' starts off with a surprisingly high pace, showing that Whitechapel could just as easily be a traditional Death Metal band. It's not long before things slow down for an anthemic chorus. Lyrically, this one smatters of insincere, angst-ridden misanthropy, and risks being cringe-worthy if you're not in the mood for it. 'Let Me Burn' is driven by a slow, pounding beat on the drum kit, and is another brutal ode to insanity, the likes of which we have come to expect from Whitechapel. Towards the end we see the frontman push his already impressive vocal talents to a new limit that would blow out the throat of many other vocalists. It's an album highlight, and will certainly be a favourite among the band's fanbase.

'Worship The Digital Age' sees the slow, chugging side to Whitechapel rule with prominence. The song slows down to a sluggish crawl before drummer Ben Harclerode gives the song a massive burst of speed to contrast with the still-lumbering riffs. 'How Times Have Changed' has the groove element present in any of Whitechapel's better songs, but fails to hit the heights that some the band's previous songs had managed. 'Psychopathy' takes a shot at creating more moody tension before the song arrives in earnest, and it succeeds. Again, the groove is present, as are the Whitechapel-style riffs that work with this band overall. 'Blacked Out' has more of the fast delivery of lyrics, and also has a few blast beats in it. The speed of the drums on this track stands out well, again offering a peek at the more traditional Death Metal influences upon Whitechapel. This isn't another style-over-substance Deathcore band, so don't feel any need to worry if you have an inherent hatred of anything 'Core'.

'Diggs Road' is the last song on the basic version of the album, and begins with a swirling instrumental break before the brutality comes in again with a heavy-as-hell riff that contains a satisfying degree of melody. If there ends up being a sub-genre called 'Melodic Deathcore' then this song could end up being referred to as a starting point; there are guitar solos good enough to please any fans of conventional Metal styles, and there's another anthemic feel to the whole song, both as a finisher of an album and as a stand-alone song. Indeed, this song provides something that was absent from a great portion of the music on the rest of the album - the proverbial punch in the face.

This is the only issue that I have with 'Our Endless War'; it has it's fair share of moments, but apart from 'Let Me Burn' and 'Diggs Road' there are songs that can feel somewhat by-the-numbers. I wouldn't go as far as to say that this album is poor or inferior (I've heard many things that are worse this year) but it feels like something of a let down after the absolutely superb self-titled album. That notwithstanding; 'Our Endless War' is a solid enough album that's worth a spin in it's own right.