Album Review; Nervosa - Victim Of Yourself 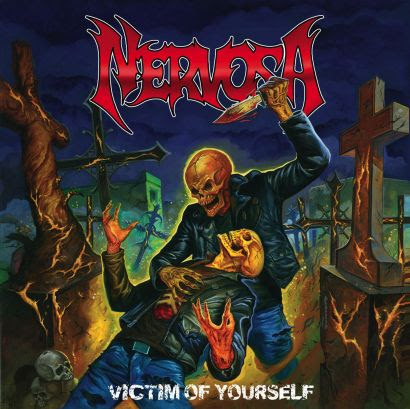 
Brazil's female Thrash Metal trio Nervosa have garnered a fair amount of attention since the band's birth in 2010, but this year sees the band releasing their first full-length album. The band have cited that their musical influences come from the old school Thrash Metal days, with Sepultura, Slayer and Exodus being mentioned in particular. As many may know, Thrash is a particular favourite of mine, so I've been waiting to get to grips with this album since it was announced.

A three minute long intro track shows that Nervosa have a taste for the darker side of Thrash, bringing to mind the likes of Dark Angel and Sodom. When 'Twisted Values' kicks in proper, there's a catchiness to the riffs that straddle atop a rather plain Thrash Metal drum beat. Vocally, the inspiration seems to have come from the likes of early Kreator and, again, Sodom. One riff in particular, which sees the music stop dead for a moment, is both effective and slightly reminiscent of early Sepultura. 'Justice Be Done' is a headbanger's practice tune; the riffs make you want to bang your head as Thrash Metal should. There's more pace shown in the drumming on this song as well as a more guttural vocal style in places, used as a backing vocal. The guitar solo half way through the song is a great one that hammers home the point that the band has real skill. Those of you hoping for an all-girl band that exists for the sake of eye candy or novelty, turn away now.

'Wake Up And Fight' sees the band use groove, anchored down by a satisfying bass line. It's already clear at this early point of the album that the band has its sound refined and set in stone. There's no progressive tinges to be had here, although the chorus riff sounds like something from a Strapping Young Lad song, which enhances the song to no end. 'Nasty Injury' is a decent mid-paced song, with a few interesting little tinges and nuances on the drums at the start of the song. Meanwhile 'Envious' is one of the harder, and more complete sounding songs on the album, a real highlight that should make it onto any Thrash fan's playlist.

Some may think it goes without saying that there's no experimentalism or leap forward for the genre to be found on this record, but while the sub-genre labels may be more or less defined in terms of the core characteristics of the sounds therein, the lines between the individual sub-genres are also becoming blurred, and in some cases are overlapping. With this in mind, it would've been nice to have heard something on 'Victim Of Yourself' that showed a touch of adventurousness. Thrash Metal is all well and good, so many won't complain.

'Into The Moshpit' was clearly written for the purpose of starting a few pits at the group's gigs. Another solid guitar solo sings out well from the gritty old-school Thrash. At this point it's worth pointing out that one of my favourite things about the way that this album is mixed is the bass guitar. The tone itself has a sharpness to it that you don't hear that often anymore, with a lot of bassists' tones sounding too silky-smooth and getting lost in the distortion of the guitars. Here, the bass stands out well, giving the attack of the music an extra edge.

'Deep Misery' is the shortest song on the album, and shows the band's ability to write a concise song that doesn't outstay it's welcome. The title track has a decent bass solo section at the start, leading in to one of the sharper riffs on the album. The speed of the song is typically fast, and only gets faster at the choruses, with the drum beat blasting ahead of the rest of the music. Unfortunately, unlike the song that precedes it, this song does eventually drag on. It could have done either with an extra dynamic element, or it could have just been cut in half.

The last track sees the band hit out with one more barrage of fast-and-furious Thrash, but apart from being particularly Thrashy it's nothing too spectacular. This is probably the single biggest issue with this album. As a record, it's solid enough to pass, but it feels too much like a homage to the glory days of Thrash Metal. At this point in time, that feels unnecessary since a lot of the classic bands of the genre are still going strong, or in some cases, stronger than they ever have! So, how much call is there for an album like this?

At the end of the day, a debut album usually shows a band just cutting their teeth, getting ready for whatever future they map out for themselves, but my concern is whether or not Nervosa have boxed themselves into a corner. At this point in time, there's actually a fair share of innovations happening within the world of Metal music, and as such, my standards for music being released is getting higher. 'Victim Of Yourself' may tick many of the right boxes for any Thrash fan, but what it's missing is that feeling of excitement. It's worth a listen or two, but it's nowhere near essential listening. Hopefully the band's second album will be a sharper affair than this.