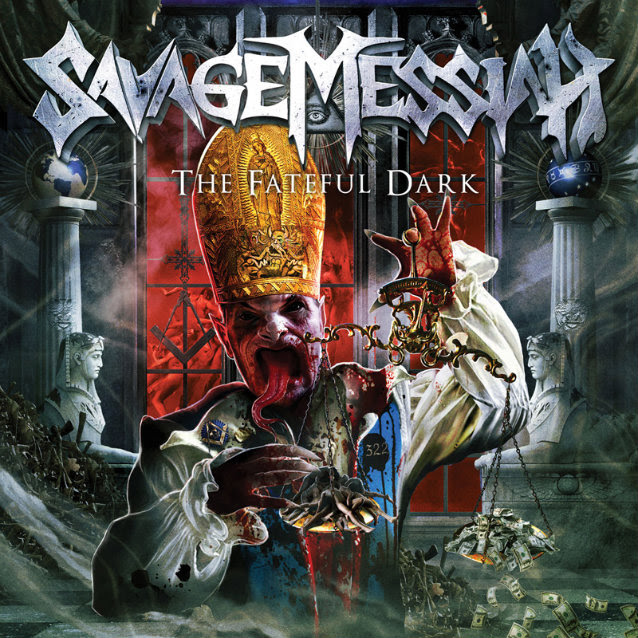 1. Iconocaust
2. Minority Of One
3. Cross Of Babylon
4. Hellblazer
5. Live As One Already Dead
6. The Fateful Dark
7. Zero Hour
8. Hammered Down
9. Scavengers Of Mercy
10. The Cursed Earth


England's standing as one of, if not the best country for the output of classic Heavy Metal albums is undeniable. This is where the whole thing started, after all. However; in the present day, the UK is often overshadowed by the USA, Scandinavia and Europe for it's output of good and great bands or albums. One problem I've noticed is an overabundance of tween, copycat Metalcore bands that bring absolutely nothing original to Metal, be that in sound, appearance, live performance, etcetera. Fortunately, those who know where to look can still find really good bands lurking underneath the smokescreen of the ludicrously mainstream. Savage Messiah are one of these bands that caught my attention in a big way only two years ago with their album 'Plague Of Conscience' and a memorable set on the Sophie Lancaster stage at Bloodstock Festival in 2012.

Upon hearing the new album, 'The Fateful Dark', I had hopes of it being another strong album from this very promising band. Kicking off with triumphant-sounding guitar leads reminiscent of 'Screaming For Vengeance' era Judas Priest, 'Iconocaust' shows off riffs that's also cut from the cloth of Megadeth and Destruction just as much as the UK greats like Iron Maiden. Dave Silver's vocals might have the odd Hetfield-like enunciation to them here and there, but there's a Mustaine-like sense of melody that works well with the technical-yet-tasteful music. High falsettos are thrown in for good measure, and the end result is a very good album opener.

'Minority Of One' has a similar feel to some of the songs on 'Plague Of Conscience', with a bloody brilliant guitar solo and the socio-political theme behind the lyrics that makes it sound like it could just as easily be a Megadeth song, and a great one at that. All credit to them for that. 'Cross Of Babylon' is a definite Thrasher, through-and-through. Andrea Gorio, the band's new drummer, shows his chops on this song, and he's a great fit with the music of Savage Messiah. There's a great sing-along quality to the chorus of the aforementioned song that has a traditional Metal or even Power Metal feel to it. Whatever you call it, it's big, it's memorable, and it shows that Dave Silver can sing his heart out, with very flamboyant vocal abilities when the music calls for it.

'Hellblazer' steps back into that Judas Priest territory again, and does so very successfully, thanks in no small part to Joff Bailey and Silver's great guitar playing . It's the kind of song that should have you headbanging like a trooper, doing air-guitar like an idiot and singing with a clenched fist raised high. Heavy Metal's pure spirit is blatantly on show here. Hurrah!

In comes the clean and emotive guitar lines for 'Live As One Already Dead'. Savage Messiah are not the first band I think of when I look for balladry, but here they show a fair aptitude for it. What they deliver here is the kind of mildly soul searching song that shows another dimension that would take a lot of people by surprise. It's a hell of a tune, and again Dave Silver shows the extent of his vocal prowess. Throw in a captivating guitar solo and you have a fantastic song, and an unexpected highlight. Too many bands are too busy trying to be brutal or too caught up in shredding like their guitarist is the new Dimebag Darrell that they miss the part where they're meant to be writing great songs, in my opinion.

The title track comes in stomping all over the place with a big, bouncing, headbanging riff. The riff-vocal-riff-vocal song structure doesn't get old, does it? Especially when the riffs are as big and juicy as the ones Savage Messiah are packing. 'Zero Hour' is equally as brilliant, with the band channelling their inner Metal God as the anthemic feel carries on from song to song. How they're able too keep up such high quality from song to song is astounding.

'Hammered Down' takes things back to the Thrash side of the coin again. It's full-speed ahead, with lyrical content and a chorus that is perfectly crafted for the live environment. A nice half-time headbanging riff is a good addition in the right place, but it's not long until the song would be calling for a furious pit. I'd be too happy to oblige at a show.

'Scavengers Of Mercy' is another Thrash Metal piece with the rhythm section sounding tighter than the coil of a bear trap. The falsettos in the chorus give the listener the evergreen chance to challenge the Halford within every Metalhead. The greatest thing about this album as a whole is that everything is sounding big. Massive, even. Producer Scott Atkins has helped this to no end, but the mainstay of the credit simply must go to the band members themselves for writing and executing a great album, their best work to date. All things considered; this album is a testimony that Savage Messiah have a lot ahead of them. They've blown my expectations apart with 'The Fateful Dark', and that is saying something. Let's hope they are recognised as a glimmer of light in what is largely a very bland UK Metal scene. That's the least that this band, and this album deserves.