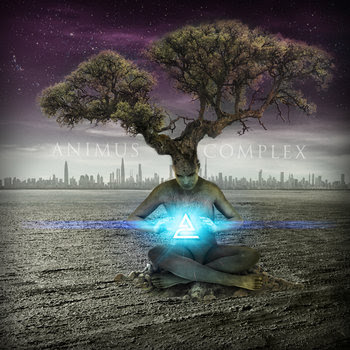 
The sound of Arizona's newcomers Animus Complex is easiest described as Progressive Metal, though there's a definite flavour of Djent and a tasteful sense of groove right from the start. The strength of this band and their debut self-titled album comes from sheer musical technicality combined with the ability to craft quality songs that won't be solely appreciated by musicians. There are enough soaring vocal melodies and more extreme vocal styles to appeal to more casual listeners.

The opening riff for 'Admission of Guilt' is a flurry of jazzy sounding single notes before a combined whirlwind of clean and screamed vocals as well as very accomplished percussive backing, that all together hooks this listener, as it should many. No riff is overstaying its welcome, and the song flows well. The album is off to a great start, and the groove comes in large for second song 'Right To Remain', which has a great chorus that will easily remain in the memory of listeners that have a taste for a good melody. The clean singing voice that this band uses reminds me a little bit of Mikael Akerfeldt of Opeth fame.

'Survive' is without a doubt my favourite song on the album. The riff used is clearly jazz-infused, but it's one of the more interesting and unique riffs I've heard recently. The melodies remain high in quality, and the guitar solo present is emotive and backed by an intricate and suitably heavy riff. The drums are another stand-out point in this song, and indeed the band. Anyone who appreciates a talented, inventive drummer will be in for a treat on this album.

'From The Bottom Of Your Soul' starts with one of the more Djent sounding riffs on the album, but it grants the listener a well-timed break from the musical complexity. The leads don't even take a minute to present themselves and are as good as you'd expect at this point. Again, the song constantly twists into something new, keeping the listener on their toes as any Progressive band should. In fact, Animus Complex are a band that are Progressive in the best way. It's superior song-writing, a through-and-through knowledge of their instruments, their own abilities and the medium of Metal that drives this album. This isn't a collection of songs in which each band member simply shows off, and throw in a flute or some obscure instrument that is new to Metal music in an attempt to seem Progressive.

The album, to my mind, has a very organic feel to it. By that, I mean that nothing sounds forced or thrown into the mix in some clumsy attempt to draw in a certain audience. 'The Way Things Should Have Been' starts of with a clean, jazzy riff and percussive background that almost sound like lounge music in a way, but the distortion kicks in at exactly the right place and the band continue to satisfy. 'I.D.' also shows the guitar player's chops, which are as undeniable as the likes of Animals As Leaders guitarist Tosin Abasi.

The album ends on a surprisingly heavy note. 'Astral Projection' has a modern American whiff of bands like Lamb Of God, but without losing the technicality. The best section of the song features a swirling background of synths over a jungle beat and some brilliant bass guitar tapping that is just sublime to hear before a breakdown comes in. As one would expect from this band, it's not a basic breakdown that has been recycled from a laundry-list of bands either.

Uniqueness is the name of the game here. Animus Complex is a band that even in such larval stages as a debut album already have their own sound and their own identity. It's one that very much stands out from the crowd in the best possible way. As the start of this year goes, I cannot think of a band quite like this that deserves your attention half as much. There is nothing I can fault this album for without targeting a particular type of music fan that this clearly is not aimed at, and nor should it be. A self-titled album should be a statement of purpose and intent, this is exactly that. If you don't know this band yet, you're missing out.